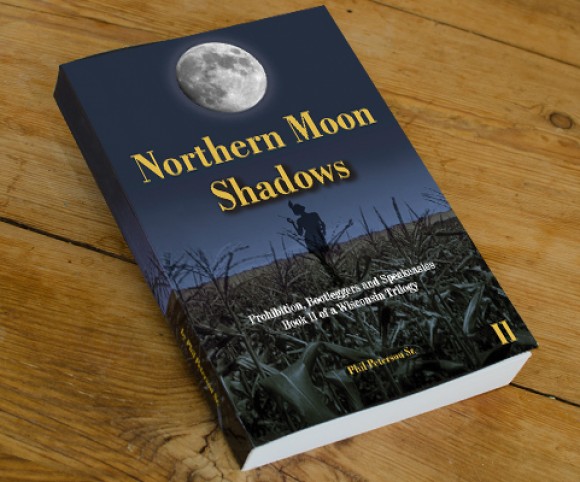 The first book of the trilogy, NORTHERN MOON, focused on the rural impact of prohibition on farmers and smaller town businessmen of western Wisconsin. NORTHERN MOON SHADOWS displays more of the urban impact on bootlegging, speakeasies, and avoiding the Federal Revenue agents that formed a cordon around the Twin Cities market of those thirsty for moonshine. The same characters are dragged more deeply into the dark underside of prohibition’s blossoming crime. Challenged by both legitimate and corrupt law enforcement, not with shootouts and bloodshed, but with secrecy, strategies and disguise, luck plays its role with some imprisoned for prohibitions now famous year-and-a-day sentencing.

Jim Hutton, Andre Cartier, with Manny of a Twin Cities syndicate, duck, dodge and overcome the challenges of ex-Federal Agent Robert Sampson, now wanted by both the Feds and syndicates for his double-dealing espionage and introduction of hijacking to the Barrens of Wisconsin. Prohibition continues to turn honest citizens and farmers into practiced criminals by the 18th Amendment.

Sampson’s obsession with young Carolyn Cartier’s body motivates him to attempt dangerous liaisons toward successful conquest. Written as historical fiction, but based on serious research, Shadows shares history as action, helping to enlighten memories of those not familiar with the actual ‘30s of Prohibition.

The approach of Prohibition’s repeal forces America’s Midwest to adjust to what’s coming, be they wet or dry, honest or dishonest, religious or non-so. With the black market of illegal moonshine and booze in billions of dollars, the government going broke trying to enforce faulty law and imprison thousands of barely-criminal citizens, the need to legalize booze to make it taxable becomes the nation’s logical priority. Repeal changes the game for Hutton, the Cartier’s, the syndicates and all involved with illegal booze. Financed by a Chicago syndicate and managed by ex-Fed Sampson, a competing distillery revives from a Fed shutdown just miles from the Cartier home. Sampson continues to prey upon the young and beautiful, now freshman, at St. Cate’s College in St. Paul.